Toffee is a playable character in Destruction Derby Arenas.

She drives a 1971 Ford Mustang, and her number is #07. Her outfit and car feature the American stars and stripes. Toffee is the champion of Redline.

[Official plot description]
Employed in the world of DD for one reason alone, and that's her head-turning, good looks. Toffee is no danger of winning the Championship or even a single race, but when it comes to the media she takes pole position every time. Of course both on and off the track, Mariah is gunning for her.

In the FDA, drivers can be polarised into four categories – four primary attributes that they bring to their team. There are the skilful drivers, the aggressive ones, the rich ones – and the beautiful ones. 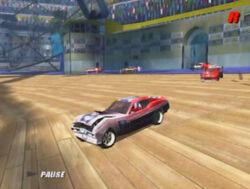 Toffee, not surprisingly, is in DD for her looks. A driver of average talent, she has developed a career through charm and fluttered eyelids, wooing prospective employers and sponsors alike to achieve her ambitions. Barely in her twenties, she’s used her natural charms and seductive southern drawl to get a long way in a short time… But now she’s in over her head.

Fresh from her rookie season, Toffee has discovered that in the cruel, brutal world of DD racing, her looks mean very little once she gets in her car. Weak drivers are exploited and victimised, easy targets for the likes of Scratch, Canvas and Clarence Carver… Scared out of her wits, she lives in mortal fear for her life.

Locked into a multi-year contract with American All Star Racing, she’s stuck, unable to negotiate a release. Sponsors and the media, the life blood of DD racing, love her, and her boss isn’t going to let his new little cash cow go for some time yet…

She can’t deny, however, that she loves the attention she gets out of the car. With magazines and TV shows clamouring for interviews and photo shoots, hers has become the most easily recognised face in the FDA. Her celebrity dwarfs even that of Danni Brennan and Mariah – and the Irish driver doesn’t like it. Used to being ‘top cat’ in the DD pitlane, Mariah is unsettled to see huge chunks of her fans, sponsors, and interviews suddenly switching to the gorgeous Toffee. Dismissing the young American as little more then an “air-head”, Mariah intends to get Toffee out of the public eye, and into a body-caste, as soon as possible. With Mariah always being one to speak her mind, Toffee is more than aware of the threat the Gaelic girl poses to her safety – so she’ll just have to swallow her fear, and take Mariah out first…

Winning the DD championship meant a lot to Toffee - specifically it meant she could finally quit DD racing in one piece. Walking away from the sport that made her name, she went on to pursue a life of a celebrity, appearing on talk and quiz shows, rock videos, cameos in films and TV, and starring in the best-ever selling issue of Playbuddy.

She soon found, however, that she was bored, that she had not only become used to the ridiculous risks life in DD entailed, but they had also started to turn her on. Finally the temptation became too much and she made a popular comeback as the darling of the DD crowds, and once again Mariah's bitterest rival. Once again crowned as DD's number one pin-up girl, she shows no sign of stopping, and at a mere twenty six years old, she'll be around for a long time to come...

Retrieved from "https://destructionderby.fandom.com/wiki/Toffee?oldid=10105"
Community content is available under CC-BY-SA unless otherwise noted.