Both Thunderhawks have acceptable, all-round statistics, and they are generally better than Cheetah's ones. The Thunderhawk is not used by any of the competitors. 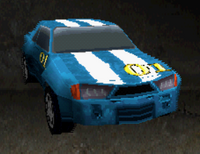 A pre-release image shows a Thunderhawk being driven by Burnout, which may suggest that it might have originally been playable by opponents.

Retrieved from "https://destructionderby.fandom.com/wiki/Thunderhawk?oldid=9830"
Community content is available under CC-BY-SA unless otherwise noted.