Set is a playable character in Destruction Derby Arenas.

He drives a Ford Thunderbird NASCAR, and his number is #28. He is available from the beginning of the game.

[Official plot description]
One of the richest men on the circuit, this multi-millionaire was actually DD racing because he was beaten at cards. He has had previous racing experiences before joining FODA, such as the World 500, but his racing career would be nowhere without his talent in gambling.

As a gambler par excellence, Set was serious peeved when Dravid Fortune took him for a ride (figuratively speaking). Now he's determined to get his thousands of money back on the Omega Racing Team circuit, or take it out of Dravid's hide. 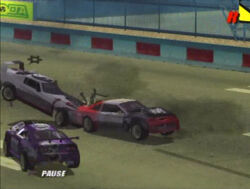 Rumoured to have been, at various points in his career, one of the richest men in his chosen proffesion, Set has been a modern myth amongst gamblers and poker players for the past three decades. Like his rival Dravid Fortune, however, his first love has always been motor racing, and Set has used a great deal of his money to enter such events as the famous Paris-Dakar endurance rally, and the Daytona 500, where he has consistantly shown both skill and mechanical experties.

All the money he has ever needed to fund these expensive hobbies appears to have been won at various poker games across the world, played for some of the biggest pots imaginable. Commonly acknowledged as an artist, Set is reknown for his almost preturnatural instincts, and his ability to read an opponent, and his/her hand, with unnerving accuracy. So good are these natural gifts that less experienced opponents often accuse him of cheating – but the true craftsmen, the connouseurs, know this is not the case – Set is just very very good…

Set, however, knows a card shark, or ‘mechanic’ in poker parlance, when he sees one – and Dravid Fortune is a good example. The two met in Vegas, and only when it was too late did Set realise what he was up against – a mechanic of the highest cunning. In a rare moment of weakness, Set was fleeced by Dravid, and his partner Chanice, for thousands and thousands of dollars… Naturally furious, Set has tracked the pair to the FDA, and now he intends to get revenge. Bringing more than welcome funds to the cash strapped Omega Racing team, Set has bought a drive in the DD series, and he intends to make sure Dravid won’t be enjoying his money for long…

A softly spoken, charming man, the clearly well educated Set is not a “fan favourite” in the way of the more outlandish Canvas, Red Widow, and Scratch. He is, however, respected by the more astute observers like Lieutenant Johnson Junior, and Jeremiah, and his team boss, Carl Newman, is thrilled to have not only a good driver with a superb degree of mechanical empathy, but one with ooddles of money!

Life was good for Set, he was champion. And he'd just taken that upstart Fortune to the cleaners. Stripping the reprobate of everything he had in a no-limits poker game. Quitting whilst he was ahead, Set went on to travel the world, applying his skills as one of the world's premier poker players before retiring and opening his own casino in Vegas. Suffice to say, Set became a very, very rich man.

Retrieved from "https://destructionderby.fandom.com/wiki/Set?oldid=10104"
Community content is available under CC-BY-SA unless otherwise noted.