He drives a 1996 Toyota Supra, and his number is #10. He is available from the beginning of the game.

[Official plot description]
A fashionable, wealthy and suave Frenchman who contributed to the racing community since his youth beginning with the Formule Tour France series, though his racing career only nose-dived due to his lack of talent and his only strong point being money. He chose FODA racing to broaden his experiences.

After his F3000 career spluttered to a halt beneath the shadow of Jared Crane's winning streak of whom did not make Noire go to the F5500 series, the young French aristocrat took to the DD circuit. After a wave of success and the wooing of the beautiful Lady Cassandra, he hopes to leave Jared in his wake. 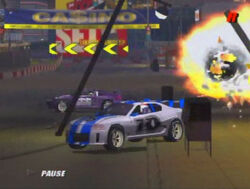 Born into French aristocracy, Sebastien Marcel Noire comes from a fine line of ‘gentleman racers’ – of which Sebastien has become the most famous.

By virtue of virtually unlimited money and talent, Sebastien initially made quick progress through the junior ranks, starting in the Formule Renault France series, through to Formule Renault Europe, and European Formula 3 before moving into Formula 3000… Then the wheels started to come off of his career. Unlucky enough to enter F3000 in the same year as the American ABC, he was vastly outclassed by Crane and his friends, Sebastien’s reputation was destroyed by the season’s end. When an F1 opportunity arose with a mid-grid, the Frenchman was overlooked in favour of the more popular, but less talented, Mariah. Sebastien next surfaced using his money to buy drives at Le Mans, before being lured into the FDA by the promise of fame and a chance to avenge himself on Crane, also now in DD racing, who he blames implicitly for derailing his career in F3000.

Sebastien has joined Cassandra FDA, his wealth easing his way into this already well heeled team. Here he finds the chance to indulge himself – enjoying the best hospitality suites in the pitlane, revelling in the glamour and danger of his chosen sport, and rubbing shoulders with the similarly wealthy and privileged – all of which are swayed by his fabulous manners, good looks, and high octane exploits. Shallow and facile, Sebastien is mesmerised by a romantic version of the world of racing – the girls and the glory, the power and the passion.

He will now never reach the pinnacle of his chosen pass-time, so he kids himself that he’s a big fish in a small pond, where as the reality is quite the opposite… Much like his boss, and girlfriend, Lady Cassandra, Sebastien is largely dismissed by the DD pit-lane as a spoilt rich boy playing with the grown-ups. Try as he might, he will never be anything other than a “nearly man” – and all the money in his world won’t change that. It’s only a matter of time until his increasingly desperate attempts to ‘punish’ Jared Crane result in a very serious accident…

No one was more surprised to see Noire win the DD championship than Noire himself. Theorising that he might as well quit while he was ahead, he quickly retired from racing and concentrated on managing Lady Cassandra's DD team. However, when Cassandra finally pulled out of DD, Noire found himself high and dry, not least because Cassandra had become bored with him and left him behind when she returned to England.

Alone, and with no team, no drive, and with his nemesis Crane dead, he too called it a day and returned home to France, where he passed his time as a B-list celebrity before being killed in a freak yachting accident. Nobody came to his funeral.

Retrieved from "https://destructionderby.fandom.com/wiki/Sebastien_Noire?oldid=10103"
Community content is available under CC-BY-SA unless otherwise noted.