He drives a 1969 Ford Mustang, and his number is #08. His car has a paintjob with the American flag and colours. Johnson is the champion of Airfield. In the game's storyline, he is the most successful driver having won more Destruction Derby championships than anyone else.

[Official plot description]
The favourite of the US fans, Johnson is as American as Mum's apple pie and a veteran of many DD seasons. His experience lends him a laid back attitude, which allows him to glide through the obstacles and casually dismiss even the most hair-raising collisions. Old colleagues of Johnson's weren't so lucky, and he has a burning desire to see Canvas pay for what he did to his friends. 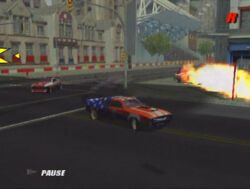 A big favourite amongst DD’s American fans, Johnson is seen as one of the ‘good ol’ boys’, and referred amongst the likes of racing legends Dale Earnhardt and Richard Petty. An ex-US air force bomber pilot, Johnson, very much amongst the senior drivers in the FDA, is a multiple champion, and probably the most unshakable driver in the series. Johnson is the epitomy of ‘laid back’ and a veteran in every sense of the word. - there’s nothing that surprises him anymore... Jokingly said to be indestructible, he’s been in innumerable accidents – and walked out of ‘em all. One DD’s ‘Classic Crashes’ features Johnson’s multiple barrel roll over the entire DD grid, demolishing ten other cars in the process, his own car bursting into flames and virtually disintegrating. Johnson climbed out of what was left with a sore wrist…

It’s this legendary resilience to injury that has seen Johnson compete in DD for over ten years - most drivers are lucky to last ten races… He’s seen young bucks like Dravid Fortune and Cadence come and go – and, frankly, he thinks DD’s better off without these idiots trying to make a name for themselves. As the ‘senior citizen’ of the FDA, Johnson is constantly the target of such young drivers yearning to gain a reputation by eliminating DD’s most famous son – not that he’s worried, of course. He’s taken on the best in his day, and invariably won… The one driver, however, Johnson does despise is Canvas. ‘That tattooed freak’, as he refers to him, ended the career of DD veteran Buck Bagwell in a typically violent crash that resulted in multiple fractures to the skull that Bagwell never fully recovered from. Johnson, an old friend of Bagwell’s, is going to make sure that Canvas pays in kind…

Winning yet another DD championship meant nothing to Johnson. He'd won so many that he'd started to lose count- all that mattered to him was that Canvas was still alive, and still hadn't paid for killing his friend, Bagwell... However, the situation came to a gruesome head when Canvas decided enough was and enough, and he was going to kill Johnson, following him home, Canvas set fire to Johnson's house and tried to beat the pilot to death with a tire iron. Johnson's wife had a different idea however, and blew Canvas into small chunks with a shotgun.

Johnson's career came to an end the following year when he was caught in a horrendous multi-car pile-up caused by Jeremiah and the Red Widow. Whilst eight drivers died in the resulting inferno, Johnson, as usual, merely walked out of the flames unscratched. So that was it. With nothing left to prove, and Canvas finally dead, his wife finally persuaded him to retire as the single most successful driver ever in DD racing, and a living legend.

Retrieved from "https://destructionderby.fandom.com/wiki/Lieutenant_Johnson_Junior?oldid=10098"
Community content is available under CC-BY-SA unless otherwise noted.