Jeremiah is a playable character in Destruction Derby Arenas.

He drives a 1969 Chevrolet Camaro, and his number is #33. Jeremiah is the champion of Steelworks.

[Official plot description]
He's known for his trademark black uniform that symbolises the eternal mourning of his friend. Up until recently, Jeremiah was a DD team owner, with stacks of wins under his belt thanks to the skills of his driver Lyle Bradshaw.

But when the Red Widow's jinx struck, killing Lyle in a barrier collision caused by a blow-out, it was time for Jeremiah to take the wheel and seek revenge. He has since seen Red Widow as a killer and he vowed to avenge his friend’s death in the FODA races so as to beat the Red Widow in the races by death or by simply winning against her. 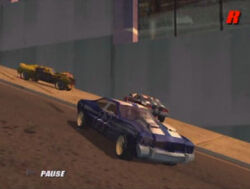 A successful industrial magnate, Jeremiah first moved into motorsport as a sponsor to a small Indy Lights team before moving onto sponsoring, and eventually owning, his own Indycar team. Forced out of Indycar by spiraling costs and diminishing returns, Jeremiah moved over to the then nascent FDA, and became a team owner there, fielding a car for his favoured driver Lyle Bradshaw, the only afro-Caribbean winner in Indycar history.

Success quickly followed, with Lyle wining numerous FDA championships and Wrecking USA tours, and it all looked so easy for Jeremiah… Until The Red Widow arrived. The Red Widow’s bizarre history of inexplicable accidents was already well known, but nobody expected her jinx to strike straight away. In her first race she led from the start, but when Lyle made his challenge for the lead, both his front tyres spontaneously exploded, and pitched him straight into the barrier, his car exploding violently. Bradshaw died on impact.

Since then, Jeremiah has driven his own car in DD, dressed head to toe in black as he continues to mourn his friend – and he won’t rest until The Red Widow is driven from the sport. Firmly of the opinion that she is a danger to herself, her team, and the other drivers, he’s hell bent on destroying her career as soon as he can, anyway he can. A hard man, and consumate businessman, Jeremiah is a tough competitor, and not easily beaten. Jaded by the tragic loss of Bradshaw, he has made few new friends – the obvious exception being his young team mate Jana Makucha – a protégé he would die for.

Championships didn't matter to Jeremiah - all he cared about was driving the Red Widow out of DD racing before she could kill anybody else. He thought his rivalry was finally over when she retired and married Jared Crane, imagine his horror when she returned soon afterwards, her husband killed in a bizarre accident. Hell bent on driving her out of DD again, Jeremiah's efforts to intimidate the morose woman back-fired in a fatal fashion when they caused a pile-up which ensnared not only his and the Red Widow's car, but a good half of the field as well. The Red Widow survived, thrown clear of her car, but Jeremiah was not so lucky, vaporised in the resulting fireball that ripped through the track when ten cars in the pile-up exploded. He was finally buried next to Lyle Bradshaw, the close friend and teammate he had died trying to avenge.

Retrieved from "https://destructionderby.fandom.com/wiki/Jeremiah?oldid=10112"
Community content is available under CC-BY-SA unless otherwise noted.