Jared Crane is a playable character in Destruction Derby Arenas.

He drives a 1993-98 Nissan Skyline, and his number is #666. His car has impressively good handling attributes (highest in game in fact). Crane is the champion of Subway.


An ex-circuit racer who was originally a part of the ABC racing trio, but his fellow racing members (who represented A and B) were stripped of their abilities to race due to Crane’s recklessness while racing and he suffers from post traumatic stress disorder from their loss. He has since become suicidal which only adheres to his racing talent as being an aggressive driver and has vowed to meet the same fate as his friends. Only problem is that he’s so good that no one has since taken him down. Similar to Jeremiah, he is known by his trademark leather jacket covered in piles of skulls. 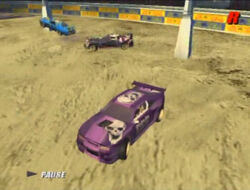 Like Lucifer, Jared Crane has fallen from grace. He was once one of a trio of unstoppable F3000 champions, until a devastating accident killed one and crippled another. The blame fell at Crane's door and he was forced into the DD racing where an old F3000 rival, Sebastien Noire, is waiting for him.

Once tipped as a future F1 champion, Crane was part of the young trio colloquially known as the American ABC – three young prodigies hailed as the future of American Racing. Alongside his friends Buddy Amber and Tony Brice, Crane swept to win after win as he and his two young friends dominated every championship they competed in. This domination continued until they reached Formula 3000 racing, and looked set to continue until all three drivers, challenging for the lead of the prestigious Monaco event, took each other out in a violent crash that crippled Brice, and killed Amber…

With popular opinion leveling the blame at Crane’s door, he fell into a deep depression, and it looked like his racing days were over. He vanished for years, seemingly, before appearing in the FDA paddock looking for a drive… Crane has since been snapped up by his current team boss, Carlton Travis of Cadaver Racing FDA, who remembered the dazzling rookie that breezed to success in his youth.

Crane has gone on to be a successful, determined competitor in DD racing - but the insouciance of his youth has gone, replaced by a brooding, guilt ridden parody of the teenager who stood on the threshold of a sparkling career. Crane’s biggest rival in DD is Sebastien Noire. Both Crane and Sebastien competed against each other in F3000, and Sebastien, even then beginning to reach the limits of his talent, was constantly overshadowed by the ABC - and now he’s made it clear to Crane he expects to exact his revenge, blaming the American for his de-railed career. Crane is more than willing to fight with Sebastien – it’s a morbid reminder of better, brighter days…

Jared's DD championship didn't make him feel any happier. Still haunted by the deaths of his friends, he couldn't take the guilt anymore, and decided to end it all by marrying the seemingly cursed Red Widow... Sure enough, their hotel burnt down on their wedding night, and Jared perished in the flames.

Retrieved from "https://destructionderby.fandom.com/wiki/Jared_Crane?oldid=10094"
Community content is available under CC-BY-SA unless otherwise noted.