Jana Makucha is a playable character in Destruction Derby Arenas.

[Official plot description]
Jana is fiercely proud of her African heritage and her gender, both of which have set her apart throughout her career. Her detractors are usually made to eat their words (and a few teeth) on the DD track.

She discovered her life’s dream in racing after seeing the Independents 700 when she was a child. She has since gone into various racing events and entered FODA in hopes of racing against the source of her inspiration, only for him to die racing against Red Widow. She has made friends in FODA such as the mournful Jeremiah, and enemies such as the chauvinistic Clarence Carver who is one such sexist bigot Jana would love to get her claws into. 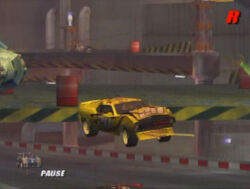 The only daughter of an African immigrant, Jana has been in love with racing since ‘daddy’ took her to a CART race to see Lyle Bradshaw in the Indy 500. Entranced by the noise and colour, she’s fought tooth and claw ever since to become a successful driver. Supported by her father, they used what money he could make selling original African artwork, and worked their way up through Quarter Midgets, Midgets, and Sprint Cars before breaking into the IRL. From there she side stepped into DD racing to race against her child-hood hero Bradshaw – just weeks before he was killed in a bizarre accident racing against The Red Widow.

Since then, Jana and her father have become firm friends with Jeremiah, sharing in the loss of his friend, and Jeremiah now runs a car for Jana – finally enabling her to fulfil her potential as a racer without suffering from a low budget… A fierce competitor, Jana is intensely proud of both her heritage and her gender, both of which have set her apart throughout her career – but now she fully intends to make her detractors eat their words…

One such critic is the outspoken Carver, who has constantly maintained woman aren’t cut out for driving cars – and targets Jana in each and every race as he tries to prove his point, going out of his way to force her out of races and derbies. Not one to be intimidated by anybody, Jana constantly gives just as good as she gets – all the more to the annoyance of Carver. Show down after showdown in races and the pitlane has made their rivalry one of the most compulsive stories in the FDA today – and everybody knows such a bitter rivalry won’t be over until one of them is history… And all the while, her father looks on, fearing each race could be her last.

Winning the DD championship was a dream come true for Jana, having finally proven her worth in a male dominated world. The sweetness of her success was soon tempered however, when her boss and friend Jeremiah was killed in a typically bizarre crash with the Red Widow.

Grief stricken by his death, she realised that she had reached a crossroad in her life. Now was the time to either walk away from the whole sport or take over Jeremiah's team, and run it in his honour. Deciding to take over the team, Jana carried on, proving yet again her strength and determination by becoming the most successful female driver/owner in DD history.

Retrieved from "https://destructionderby.fandom.com/wiki/Jana_Makucha?oldid=10113"
Community content is available under CC-BY-SA unless otherwise noted.