Dravid Fortune is a playable character in Destruction Derby Arenas.


All-American rich-boy Dravid made a name for himself in Formula Ford and Formula Atlantic. When daddy withdrew Dravid's DD funding after a heated argument, Dravid fell back on the sponsors. But that support was soon flushed away in the casinos of Las Vegas and if he hadn't cheated fellow driver Set out of a fortune, Dravid wouldn't be a DD driver now. 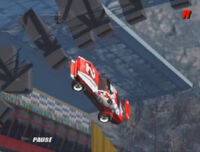 Dravid loves America. He loves the culture, the mythology, and the popular conception of the American Way of Life. Born Dravid Umesh Luharia, Dravid hails from an affluent family in California, and, as an only child, he was spoilt rotten, and his every wish was indulged by his father, a succesful shoeshop owner. And Dravid’s passions included a burning desire to race… At the tender age of six, he was winning races in quarter midgets. By the age of eighteen he’d been kickin’ ass in Formula Ford for three years before graduating to Formula Atlantic – all of which was funded by his father’s money.

At this point, things started to go wrong. By now totally in love with ‘America the Brave’, Dravid had changed his name, forsaken his heritage, and rubbished his father’s ambition for his son to take over the family business. Dravid didn’t want to sell shoes, he wanted to be an American hero – and to hell with his father, who, deeply wounded, withdrew his support from Dravid’s burgeoning career. But Dravid didn’t care. He didn’t need his dad’s money – he had sponsors, and he’d discovered Las Vegas. He’d make all the money he needed there, and indulge every whim and fantasy he could imagine…

Within months Dravid lost almost every cent he had, addicted as he was to gambling. The nadir came when he was arrested for curb crawling and being drunk in control of a motor vehicle. His top-line career was pretty much over by now. His sponsors deserted him, and any prospective drives simply vanished. His family, heart-broken, had washed their hands of him, and his fiancee had ditched him the instant she found out he’s been curb crawling. He was on his own… But now, after three years in the wilderness, he’s back. Still a habitual gambler, he’s become a card shark, working his way around big games with his new partner, and lover, Chanice – they’ve just won, and won big. With thousands of dollars suddenly at his disposal, he’s bought a ride in DD, the latest sensation in organised racing. With his rookie season behind him, suddenly he’s an American hero. With gambling in Dravid’s blood the crowds love his high-risk maneouvers and dicey overtaking. Dravid himself is in seventh heaven - every race is a chance for glory. Every corner holds risk of death…

The only fly in his ointment is his new nemesis - Set, DD's other professional gambler. Ever wonder just who Dravid won all that money from? That’s right. Set. And, if he can’t get his money back, he’s gonna make sure Dravid isn’t in a fit state to enjoy it…

When Dravid finally cemented his fame by winning the DD championship, he thought his long road back from destitution was at an end. But when his old nemesis Set challenged him to a double or quits game to settle the debt between them, Fortune was unable to resist... Within hours he lost everything- completely taken to the cleaners by Set. So now he's back to where he started, completely ruined, penniless, and alone having been deserted by his gold digging lover. But does he care? Hell no- this is America, the land of opportunity. He's come back from the brink once, he could do it again...right?

Retrieved from "https://destructionderby.fandom.com/wiki/Dravid_Fortune?oldid=10116"
Community content is available under CC-BY-SA unless otherwise noted.