Can anyone stop the mechanical mayhem?
~ from the main menu theme

Destruction Derby Raw is the fourth installment in the Destruction Derby series, released exclusively for the PlayStation in June 2000. It was developed by Studio 33 and published by Psygnosis (in Europe) and by Midway Games (in North America).

Psygnosis, part of Sony Computer Entertainment (SCE), disappeared from North America by 1999, but through a publishing deal with Midway Games, Raw was able to be released on that market too.[2] The same year saw the release of Destruction Derby 64, developed under license from Psygnosis. Destruction Derby Raw was one of the last games to feature the Psygnosis name as the company was fully integrated into SCE Europe and renamed to Studio Liverpool.

The two PlayStation predecessors had platinum sales, and Raw continued this success yet again. It was added to PlayStation's Platinum Range/Greatest Hits on 15 February 2002.

These are screenshots taken from the PlayStation Magazine 01/00 disc from 1999, which show early previews of Destruction Derby 3. 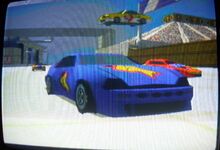 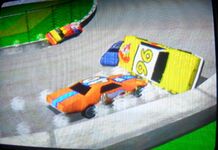 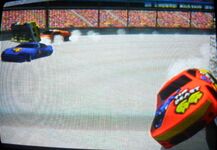 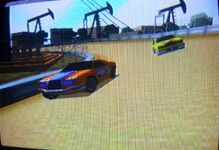 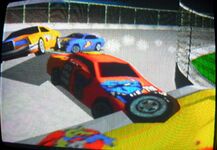 Most tracks were re-shuffled in the final version. Also notice that there are here two Carparks and one Fall Out.

Notice the name [DRAGONFLY - SHORT], and the art of the track.

The no. of competitors could have been chosen.

Arrows next to Position were later added, and also notice X: Frontend, which clearly denotes this being a pre-release version.

Again, the no. of competitors could've been chosen.

This shows the Thunderhawk in the Smash 4 $ garage, and strangely with the name 'The Beast' (which is a competitor), so there's a possibility that each driver would've had their own exclusive car and/or that the drivers were all playable.

Most likely the Docklands bowl.

This looks a lot like an earlier art of Slammer.

These images show how the three cars in question looked like some time during development. They were taken from the Spanish Superjuegos magazine. They look similar to final except from minor design changes, like the colours and wheels.

Destruction Derby Raw had a large overhaul in gameplay terms, with both speed and collisions toned down compared to Destruction Derby 2. This made the car physics and car handling to look more realistic. The classic Destruction Derby events have also been toned down, making them easier to complete (DD2 was considered by many to be very difficult). Generally races and derbies last longer now because there is a lesser chance to wreck a car as quick.

The pit stops were removed in tracks as well as the commentator, and competitors' profiles. The commentator was re-added Raw's successor, Destruction Derby Arenas, making Raw the only game in the series without a commentator. A notable addition to Raw was the turbo boost, which gives temporary extra speed to the player.

Although points were always a key element in the series, Raw expanded on the points system with a much greater amount of point-earning events - the previous games were somewhat limited to spins. Each point 'event' also bears a unique name of its own that is displayed on screen when achieved. They are listed in the section below.

There has also been a change to the damage engine in Destruction Derby Raw. A car that has had its front badly smashed cannot be totally wrecked unless the overall damage meter is filled up to the top. This arguably makes it less risky to hit others with the front bumper compared to Destruction Derby 2 and the first Destruction Derby, where a car would be completely wrecked with its front totalled even if the rest of the car is in good condition. While this sounds like surviving is easier in Raw, there is a catch because now in race events the player must stay alive regardless, or else will get no points. A subtle change compared to DD2 is that tyres are no longer lost when a car's rear is totalled.

Destruction Derby Raw no longer uses a 'division' system in its career modes, and it has no seasons either (this was also the case in Destruction Derby 64). Every race is instead done individually. Raw is also the only game in the series where career modes do not have any derby events, only races. In Raw, the player always starts a race on 20th (last) place.

Like DD2 before it, Raw was very much American-inspired, but this time shed the high-speed NASCAR style in favour of a western/country theme, with many cars based on American classics. This is very well demonstrated in the game's credits FMV, mixing both that theme with a silent film-like presentation.[3]

All the crash points in the game have names, as shown in the game's manual. The manual also states: "The lowest single score is 10 points for a minor bump, but you can create combo carnage for up to 1000 points!". The maximum number of points possible is 9999, though this is extremely hard to reach and arguably only possible in the Classic or Skyscraper events. In the Battle modes, the points are referred as 'Battle Points' at the end of an event.

Unlike in Destruction Derby 2, attacking cars that are flipped over now earns the player points as normal.

The tables below show all the points events in Destruction Derby Raw.

Destruction Derby Raw has a large variety of game modes with several newly introduced, including a team-play mode and a DD-style event on top of buildings. The Battle modes all support multiplayer with up to 4 player splitscreen.

Destruction Derby Raw has a total of 25 race tracks (most in the series). For some tracks there are two variants: one being a long one and the other a short one. In the case of Avalanche though, both its two variant tracks are about the same in length but with subtle differences - for the sake of correctness it is labelled here as [1] and [2] instead.

However the short version of a track is not necessarily quicker lasting - their laps are normally higher, and the number of laps can range from 4 to as much as 15 (in Oilslick and Carpark). Races can take place either during the day, dusk or night - this variable is randomly chosen by the game when starting an event.

The following list of tracks is sorted by their order of appearance in Smash 4 $:

*Has 15 competitors rather than 19, presumably due to the short size of these tracks.

There are three bowls (each called "Arena" in-game) with the main differences being the environment. Unlike Destruction Derby 2, all the bowls in Raw are available from the beginning without having to unlock them.

The skyscrapers (called "Highrise" in-game) are the top of blocks used in Skyscraper mode.

There are 18 cars in the game. Each of the cars have an upgraded version, effectively making 36 total. The upgraded models usually have better stats, and are distinguished by their wheels. Many of the cars are based on classic American ones.

Bonus cars are basically part of the total 36, but are treated as ones that must be unlocked one by one in Wreckin' Racing, before they can be bought (and saved) in Smash 4 $ mode.

Cars can be saved on the PlayStation memory card so that they can be loaded and used in one of the Battle modes. To do this, the player must first purchase a car in Smash 4 $ before having the ability to save it. Any owned car from Smash 4 $ can be saved with those stats, so if the car has been tuned (upgraded), it would be saved that exact way. This also includes if the car's Strength stat has decreased after taking part in a Smash 4 $ race.

Cars listed italic are bonus cars..
* Not driven by your competitors.

These cars appear in-game (whether in gameplay or an FMV) although are not playable.[4]

Humvee: your and your CPU's team mates in Assault mode.

1980-85 Chevrolet Citation. Featured in the intro. 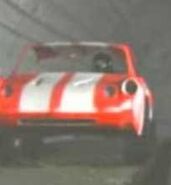 Unlike the two predecessors, the drivers of Raw don't have a profile or picture. However they generally do still differ in terms of ability.

The 'best' competitors in races are most likely going to be Punk Face, Harry, Fastback and Easy Ride. They normally always begin races from 1st to 4th place respectively, and usually always finish in the top 6. These four notably also have unique exclusive paintjobs that cannot be chosen by the player. The four drivers listed above don't take part in derbies, where there are only 15 opponents.

While they are usually the best, there are several other drivers that often do better, such as Berserkoid or GT Luvva. Much of this usually depend on the specific race tracks - for example Punk Face almost always finishes 1st in the game's first track, Dragonfly, but in certain other tracks is likelier to finish behind a few other competitors. Some drivers that are weak in races perform much better in derbies, like U Suck. Generally though the competitors are not as varied in terms of style as they were in Destruction Derby for instance.

Each competitor has two or three types of cars of choice that they use, and two colour choices (except the four listed above). Their choices always depends on what car and colour the player chooses.

The AI in Raw is largely toned down compared to Destruction Derby 2. The opponents almost always drive at a lower speed than the player's, making it a lot easier for the player to finish high up in races (although countervailed by the fact the player always starts at last place), and spinning opponents is now also easily done. Opponents are much less likely to be gripped compared to DD2, which is a combination of the weaker AI and the newer damage engine. They are also easily affected by the player - if the human player hits a driver really hard at least twice, they are very easily going to lose control and struggle to get back to driving.

When you newly start the game, the default high scores are as follows:

These all look like random names, with the exception of HARRY and PUNKFACE, which are real competitors in the game.

Destruction Derby Raw is the only game in the Destruction Derby series that contain (at least notable) regional differences. As the game was published in North America by Midway Games instead, a different cover box art was created and the logo on the cover was redesigned too. In-game however this logo never appears and the original PAL European one is still there. Below is a further list of differences:

The game's soundtrack is made up of rock, with a few other influences including country music. According to the credits, as listed under In-game Music ~ Psygnosis, Gary McKill, Mike Clarke, and Dan Selby composed the songs. Interestingly if you put the Raw CD in a computer, the OS would tag the artist as System of a Down. This is most likely just a tongue-in-cheek by a Psygnosis employee.

Unlike the previous games, Raw does not have an in-game music player. However the disc is still CDDA so the tracks can be played on a standard CD player.

The title of the first song, "Overwhelm and Destroy", originates from the 1966 American film Mondo Keyhole. This also appeared in the song "Brain Freeze" in Command & Conquer: Yuri's Revenge.

Reception to Destruction Derby Raw was largely mixed to positive. PlayStation Magazine (PSM) in a preview called the Pass Da Bomb mode a "great addition" and was happy with the "realistic" car damage.[12] The reviewer from GamePro called it a "good" game and praised the sound effects and its "appropriate" soundtrack, but noted the "significant slowdown" when a lot of cars are on screen.[13] Chet Barber from NextGen felt that DDR brought nothing new to the table compared to the first two games, and thought that there was a quality decrease.[8] 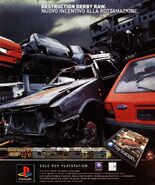 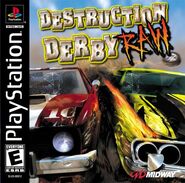 Retrieved from "https://destructionderby.fandom.com/wiki/Destruction_Derby_Raw?oldid=10120"
Community content is available under CC-BY-SA unless otherwise noted.