Canvas is a playable character in Destruction Derby Arenas.

He drives a 1970 Pontiac Firebird Trans Am, and his number is #17. He has very spiky, flaming red hair. Canvas is the champion of Titan.

[Official plot description]
The mysterious, violent, tattooed terror of the pit lane, where Canvas drives destruction is sure to follow. And behold a dark car: and his name that sat within was Canvas, and Hell followed him. Known for his variety of tribal body tattoos and his ability to intimidate everyone he comes in contact with.

He feeds off of people’s fear of him, but he has only encountered one racer who refuses to fear him: Lt. Johnson Jr. Johnson’s lack of fear for Canvas has fueled more than Canvas' rivalry with Johnson; Canvas has become so disturbed by not being feared by Johnson, that he feels it’s necessary to bring Johnson to his knees or kill him in the race. 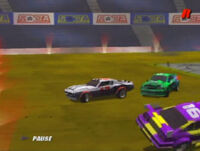 Like Moses and the Red Sea, crowds part when Canvas walks down the pit, and rooms empty when he appears. A glaring, silent presence, nobody can meet his gaze, and nobody can look in his face… Even Jana Makucha, widely held to be the most fearless of DD drivers, is visibly unnerved just by the tattooed legend's sheer presence… Monosyllabic at best, he has no friends, nor is there any evidence of family. Seemingly existing purely to race, he lives in a dirty old trailer following the DD circus across America, in which, popular myth would have you believe, he watches endless car crashes to get his kicks.

The terror of the DD pitlane, nobody knows Canvas’ background, and nobody dares ask. Appearing in his own car five years ago, Canvas has become the darling of the DD spectators. Canvas merchandise outsells every other driver’s by at least 2-1. Indifferent to the sublime talent of, say, Jared Crane and Danni Brennan, the vast majority of DD spectators are there to see death and destruction – and Canvas gives them both by the bucket full. Not even Scratch can solicit more raw fear from his opponents and not even the Red Widow has more kills, or crippling injuries, to her name.

One such victim was DD veteran Buck Bagwell. A friend and contemporary of fellow ‘old timer’ Lt. Johnson Jr., Bagwell’s career was ended abruptly by Canvas in the tattooed enigma’s very first race. Starting as he meant to go on, Canvas took Bagwell out in a horrific crash that resulted in Bagwell suffering from multiple fractures to his skull. He never raced again.

To this day, Johnson Jr has never forgiven Canvas for the injuries his friend endured, and he, and he alone, has the balls to stand toe to toe with Canvas in the pits, eye to eye as they attempt to out-psyche each other… Johnson is, by far, Canvas’ most implacable nemesis – and that’s a bad place to be. Canvas is a force for destruction, Beelzebub’s scourge on the Earth – and if Lt. Johnson Jr. won’t show him the terror he deserves, then Canvas will just have to kill him!

The only thorn in Canvas's side, even though he won the championship continued to be old rival Johnson Jr. No matter how hard, or how many times Canvas tried to kill the American on the track, Johnson just kept walking away unharmed. Frustrated beyond belief, Canvas decided that if he couldn't kill Johnson in a race, then he'd kill him away from the circuit...

So Canvas followed Johnson home one night after a race and set fire to his house. As Johnson and his family escaped, Canvas set about Johnson with a tire iron, intent on beating him to death. But behind every great man is a greater woman, and Johnson's wife is no exception. Coming to her husband's aid, she got the shotgun from the shed, and blew Canvas to pieces with it.

Community content is available under CC-BY-SA unless otherwise noted.